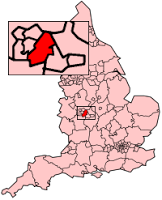 Birmingham’s gay village was shut down yesterday due to widespread looting and fires. ZONE Magazine reports:

The London riots have spread beyond the capital to Birmingham, including the Gay Village. Popular gay bars Missing, The Loft Lounge, Equator, Purple Bar and The Angel Bar were all closed on the advice of police at around 9pm last night. The police have confirmed that at least 35 arrests have already been made. The Birmingham Hippodrome theatre, which is located on the edge of the gay village in the Southside area of Birmingham, was on a ‘lockdown’ with up to 2,000 theatre-goers locked inside watching We Will Rock You. Following the performance, police escorted patrons to the safety of their cars in the Arcadian Centre.

There was widespread looting in the city centre, including the Armani shop in The Mailbox. Kevin Breese, General Manager of Birmingham’s Harvey Nichols shop, confirmed that the ajacent Armani shop has been completely looted. ‘They were very well organised youths, with wirecutters and concrete blocks,’ he said. West Midlands Police continued to tackle the disorder occurring in Birmingham last night. Several premises were attacked, with some shop windows smashed and property stolen in various locations in the centre, as well as some surrounding areas.

Hit the above link for live updates on the situation.