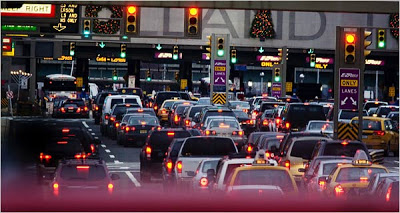 This is an old ploy by the Port Authority. Propose an insane toll increase and then “settle” for one that feels entirely reasonable by comparison.

The cost of crossing the bridges and tunnels that span the Hudson River to New York City could rise by 50 percent for many drivers under a steep series of toll increases to be proposed on Friday by the Port Authority of New York and New Jersey, according to two people familiar with the plans. A $4 toll increase for E-ZPass users could go into effect as soon as September on the three major Hudson River crossings – the George Washington Bridge and the Holland and Lincoln Tunnels – as well as three other bridges between New Jersey and Staten Island, the Bayonne and Goethals Bridges and the Outerbridge Crossing. The biggest increase by far would be felt by drivers who pay in cash: cash tolls on those crossings would be raised by $7, to $15 a trip. (By comparison, a cash toll on the Verrazano-Narrows Bridge currently costs $13.) About 25 percent of drivers on the Port Authority crossings currently pay in cash.

The Port Authority also calls for raising the PATH train fare by one dollar.