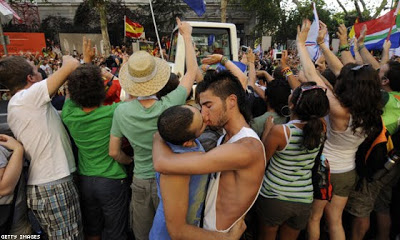 Photo Of The Day – Papal Kiss-In Advocate reports: “Hundreds of LGBT protesters planned to kiss while Pope Benedict XVI was en route through Madrid, but police blocked the protesters before they could meet up. The activists had planned to join up on the major artery Calle Serrano, along which the pope later traveled in his bulletproof white vehicle for a welcoming ceremony in Plaza Cibeles Square.”

Previous NOM Vs. Libertarians
Next A Nice Mention From CBS