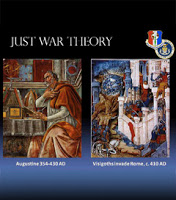 Jeebus Wants You To Nuke The World After an expose by the website Truth Out, the Air Force has suspended a program that uses Christian parables to teach “nuclear ethics.”

The course was led by Air Force chaplains and took place during a missile officer’s first week in training at Vandenberg Air Force Base in California. Officers who train to be missileers were required to attend the ethics course, which included a PowerPoint presentation on St. Augustine’s “Christian Just War Theory” as well as numerous examples of characters from the New and Old Testament the training materials asserted engaged in warfighting in a “righteous way.” St. Augustine’s “Qualifications for Just War,” according to the way the Air Force characterized it in slides used in the ethics training, are: “to avenge or to avert evil; to protect the innocent and restore moral social order (just cause)” and “to restore moral order; not expand power, not for pride or revenge (just intent).” One of the PowerPoint slides also contained a passage from the Book of Revelation that claims Jesus Christ, as the “mighty warrior,” believed some wars to be just.

According to the Military Religious Freedom Foundation, the Christians-only nuclear training constituted a blatant violation of the Constitution.