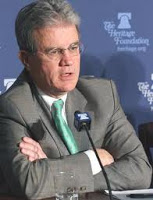 GOP Sen. Tom Coburn: The Cowards In The Senate Are Just Lucky I Can’t Carry A Gun GOP Sen. Tom Coburn says he’s so disgusted with his colleagues, that “It’s a good thing I can’t pack a gun on the Senate floor.” Coburn continued his diatribe by declaring that the health care system was better back when patients paid their doctors in chickens.

“You can’t tell me the system is better now than it was before Medicare,” he said. He told a group at the Integris Mayes County Medical Center in Pryor, Okla.: “Show me where in the Constitution the federal government is responsible for your health care?” Without specifying what he meant, Coburn said President Barack Obama has an “intent is to create dependency because it worked so well for him.” The World’s caption below a photo of Coburn reads the understated: “Disagrees with Obama’s politics.” “As an African-American male,” Coburn said, Obama received “tremendous advantage from a lot of these programs.” The programs were not identified in the World report.

Double bonus GOP points for the racism in the last sentence!

Previous Sounds Like Jesus
Next Olbermann: GOProud Moneyman Peter Thiel Is The Worst Person In The World