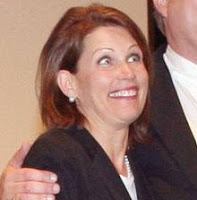 Bachmann, a favorite of the ultraconservative Tea Party movement, said she would revisit the policy if she reaches the White House. “The ‘Don’t Ask, Don’t Tell’ policy has worked very well,” she told CNN’s “State of the Union.” “I would be in consultation with our commanders, but yes, I probably will” reinstate the ban, she added. The ban was overturned in a law adopted in December 2010 that first required the top military officer, the defense secretary and the president — who is also commander-in-chief — to certify the change would not harm military readiness and that the armed forces were ready to carry it out.

GOProud will be thrilled.