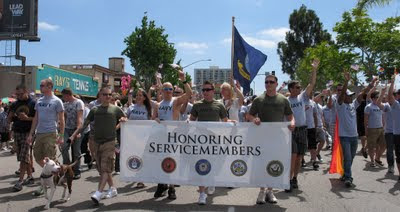 For first time in American history, yesterday hundreds of openly gay servicemembers marched in a gay pride parade as the military town of San Diego cheered.

The crowd roared as the group waving military flags and holding placards identifying their military branch walked past the thousands. Every branch of service was represented Saturday, including the Coast Guard. Marines and sailors ran out carrying their branch’s flags over their heads. One Marine stopped to pose with two towering bikini-clad blondes in stiletto-heeled boots. Onlookers stepped into the parade route to salute them. One man in a rainbow colored shirt waved his feather boa and yelled “Hooah!” the military battle cry. The national Servicemembers Legal Defense Network – representing gay and lesbian active-duty military personnel – informed organizer Sean Sala that they are warning members that it is still a risk to come out as long as “don’t ask, don’t tell” is on the books. Sala, a former Navy operations specialist, said it’s time for the gay and lesbian community to stop hiding in fear.

Photo above and video by Rex Wockner. Many more photos at the link.