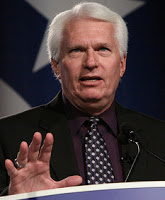 Only Losers Call People ‘Nazis’ And If You Don’t Agree, You’re A Fucking Nazi The American Family Association’s Bryan Fischer is furious that somebody on the internet called him a “Nazi gas bag.” Because only losers call people Nazis.

Right Wing Watch notes: “Bryan Fischer is a lot of things, self-aware is not one of them.”