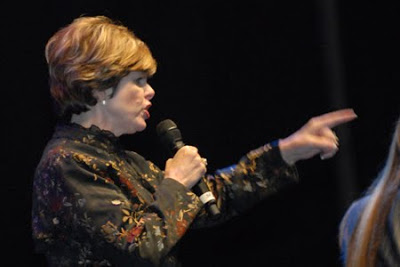 Whackdoodle televangelist Cindy Jacobs, whom you probably best know for claiming that God killed millions of birds to show his displeasure with the repeal of DADT, relates her first biblical vision:

Around three a.m., I was awakened by a voice, “Wake up! I want to talk with you! I am Gabriel and I am here to give you a message from God.” I did not see him; nonetheless, I had no doubt that he was who he said he was. The next thing I knew, I was having a vision of mounting and riding a huge chestnut horse and my friend Julie was mounting and riding a white stallion. She was part of a vast army of women. As the Lord showed me country after country, I saw thousands of women on horseback behind me to march across the earth. In the vision, I was wearing armor and carried a sword.Gabriel told me that the women in the vision comprised a great company of women who would march across the planet, preaching the gospel, doing miracles, and transforming the nations.

Jacobs says that God frequently speaks to her personally. That’s when he reveals the various reasons that he routinely kills millions of people with earthquakes and tsunamis. Usually, it has to do with the gays. Gay marriage in Mexico City? Kill 50,000 Japanese! So sayeth Cindy.

Previous Obama: We Still Have Ways Out Of This
Next Morrissey Out-Douches Himself