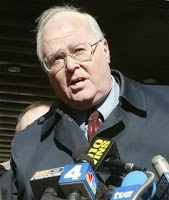 “Former Gov. Eliot Spitzer enthusiastically signed a law extending religious rights in the workplace, one that went beyond the ‘reasonable accommodation’ provision of the 1964 Civil Rights Act. Indeed, under New York State law, the onus is on the employer to show that it would cause “undue hardship” if an employee were to exercise his “sincerely held” religious beliefs. Now it is fatuous to say that it would cause an undue hardship in the workplace if clerks, and deputy clerks, who do not have an issue with giving marriage licenses to homosexuals handled these matters for those who do. It cannot be said too strongly: Bullying those who have religious objections is despicable. There is an obvious hole in New York’s gay marriage law: religious exemptions need to be extended to lay people, not just the clergy.” – Catholic League blowhard Bill Donahue.