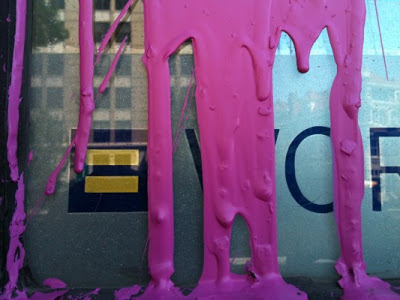 The Human Rights Campaign (HRC) gift shop in Dupont Circle in Washington, DC is a god awful monstrosity. We were in there yesterday and between wiping our genitals on the clothing and discovering that the snow globes wouldn’t properly fit up our bums, we got to thinking: “This place would look great with a bit of shattered glass and splattered paint.” So we strapped on our riot chaps, poured pink paint into light bulbs, grabbed hammers, and went party party party! all over that tacky testament to the transformation of radical queer liberation into consumer junk.

The New Gay has a statement from the HRC:

“HRC’s DC Action Center and Store was vandalized last night with paint on the front windows and an LGBT group has claimed responsibility for the crime. It’s unfortunate that after a marriage win in New York that represented an unprecedented coming together of LGBT groups, some are more interested in fostering division in the community.”