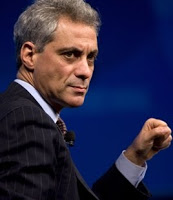 “I would hope that the state would move in that direction,” Emanuel said in the interview that aired Wednesday. “Tremendous progress has been made across the country on a value statement and I think that’s very important.” Emanuel declined to comment on Obama’s stance on the issue, but noted that the president has signed into law legislation that recognizes hate crimes based on sexual orientation and a repeal of the “don’t ask, don’t tell” policy that prevented gay men and lesbians from serving openly in the military.