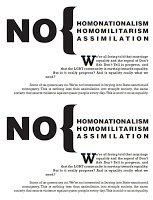 The so-called “queer anarchists” who rampaged through the streets after Seattle Pride have issued a statement.

Last night, some queer hooligans had the audacity to take the streets for the third year in a row. It was a smashing time! Queers Fucking Queers, a free, all-ages street party, erupted on the corner of 12th and Madison at midnight last night. The party quickly breached the confines of what’s tame and legal during Pride weekend when somebody smashed the window of a Ferrari dealership near the meeting point. Then the homo hoards charged down Pike, the windows of two cop cars left shattered in their wake. Rainbow flags became weapons as the queers raged on down Broadway, the cops sniffing along after like rabid dogs on the prowl. But these fascist prudes were too slow to protect a Bank of America ATM and American Apparel from this hot mob of style vandals. The hood of a cop car briefly transformed into a dance floor, and queers fought the cops in the streets. One person was hauled off to jail for “pedestrian interference”, but others fought off the pigs and escaped their nightsticks with the help of friends.

At the top of this post is the front of the flyer handed out before the dumbassery began. Download the rest of it here (PDF).