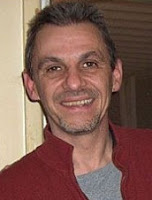 On the heels of Gay Girl In Damascus scandal comes news that the author of the popular Lez Get Real is also a man.

Just one day after the author behind a popular Syrian lesbian blog admitted to being a married, American man named Tom MacMaster, the editor of the lesbian news site Lez Get Real, with the tag­line “A Gay Girl’s View on the World,” acknowledged that he is also a man. “Paula Brooks,” editor of Lez Get Real since its founding in 2008, is actually Bill Graber, 58, a retired Ohio military man and construction worker who said he had adopted his wife’s identity online. Graber said she was unaware he had been using her name on his site.

This bit kills me: “In the guise of Paula Brooks, Graber corresponded online with Tom MacMaster, thinking he was writing to Amina Arraf. Amina often flirted with Brooks, neither of the men realizing the other was pretending to be a lesbian.”