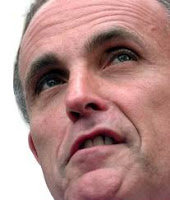 Remember when former NYC Mayor Rudy Giuliani fled to the home of his gay best friends during his divorce? And how he promised to personally marry them once it became legal? Not so much.

“I asked if he would marry us,” recalled Howard Koeppel, the unlikely provider of an emergency Midtown crash pad to Giuliani for six months when his marriage to Donna Hanover was crumbling and Gracie Mansion was a war zone. “He said, ‘Howard, I don’t ever do anything that’s not legal. If it becomes legal in New York, you’ll be one of the first ones I would marry.’Ten years later, Koeppel is distressed that his former house guest hasn’t returned the many calls he began making before the legislation was passed last week. “It seems like a lot of people he was close to become persona non grata,” Koeppel observed.

One political wag observed: “[Presiding at the wedding] would be a sign he’s no longer interested in running [as a Republican] for president — ever.”

Previous Elaine Donnelly: The DADT Fix Was IN!
Next The Pope Has An iPad