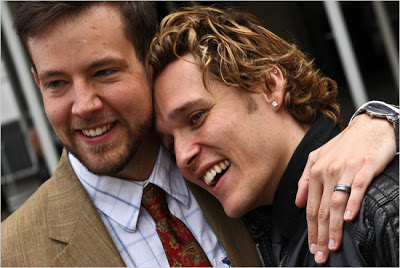 In what the New York Times says may be a precedent-setting decision, the federal government has dropped its deportation case against a gay Venezuelan legally married to an American man.

The announcement comes as immigration officials put into effect new, more flexible guidelines governing the deferral and cancellation of deportations, particularly for immigrants with no serious criminal records. Immigration lawyers and gay rights advocates said the decision represented a significant shift in policy and could open the door to the cancellation of deportations for other immigrants in same-sex marriages. “This action shows that the government has not only the power but the inclination to do the right thing when it comes to protecting certain vulnerable populations from deportation,” said the couple’s lawyer, Lavi Soloway. The case has been closely watched across the country by lawyers and advocates who viewed it as a test of the federal government’s position on the Defense of Marriage Act, a federal law that bars the federal government from recognizing same-sex marriages.