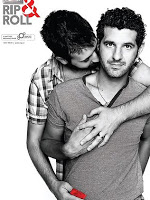 Brisbane’s safer-sex ad campaign has been reinstated after widespread outrage across Australia. The campaign had been yanked after complaints from an anti-gay Christian group.

Announcing their backflip this afternoon, the company said it had changed its mind because it did not realise it had been subjected to a campaign from the Australian Christian Lobby to remove the posters. “Following ACL Queensland director Wendy Francis’ acknowledgement that the complaints received by Adshel, Brisbane City Council and the Advertising Standards Bureau regarding QAHC’s campaign have been orchestrated by the Australian Christian Lobby, Adshel is reinstating the ‘Rip and Roll’ campaign,” a company press release said. “Adshel earlier responded to a series of complaints by removing the campaign from its media panels yesterday. None of the complaints indicated any liaison with the ACL, so Adshel was made to believe that they originated from individual members of the public.”