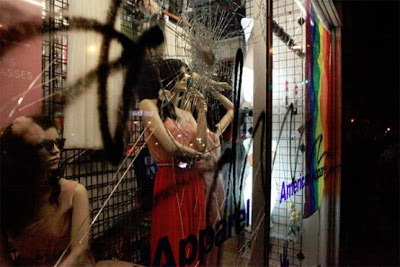 According to KOMO television, several hundred so-called “anarchists” rampaged through the streets of Seattle last night in an action that some said was in protest of the commercialization of gay Pride. Police cars and storefronts were destroyed by rock-throwers.

Several hundred people swarmed through the Capitol Hill area overnight, noisily vandalizing stores and smashing windows before dispersing into the darkness. Police say the drama began shortly after midnight Sunday when a flash mob gathered, passing out flyers, during a dance party. But the mob soon went out of control, creating havoc, said Renee Witt of the Seattle Police Department. The mob marched down 12th Avenue and Broadway, yelling and chanting. Some carried rainbow flags, while others carried red-and-black flags and wore masks.

Eventually some people started smashing store windows, damaging property, spray-painting slogans and bashing in the windshield of a patrol car. “It was just a walk down the street – it was a dance party down the street – and some idiot started throwing things,” said one young woman who was there. Some people in the group, described as anarchists, apparently chose to use Gay Pride Weekend to send to message of protest – upset at how much gay pride is now part of the commercial mainstream. “There are some anarchists, gay activists, that don’t want to be assimilated into capitalists’ culture, and they feel like they’re being exploited by companies like American Apparel,” said Endresen Evans, who lives on Capitol Hill. That’s why it appears protesters specifically targeted the store. A rock was thrown through the window and then vandalized with black spray paint.

Other say the melee had nothing to do with gay Pride at all and that only a handful of those on the street were with the group of “anarchists.”