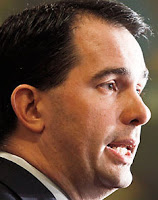 Wisconsin GOP Gov. Scott Walker has ordered the state to stop defending a 2009 law granting gay couples the right to visit each other in the hospital and make end-of-life decisions. The anti-gay group Wisconsin Family Action is suing the state to overturn the law.

On Friday, Walker filed a motion to stop defending the case. “Governor Walker, in deference to the legal opinion of the attorney general that the domestic partner registry…is unconstitutional, does not believe the public interest requires a continued defense of this law,” says the brief, filed by Walker’s chief counsel, Brian Hagedorn. Hagedorn told Dane County Circuit Judge Daniel Moeser that if he could not withdraw from the case, he would like to amend earlier filings to reflect Walker’s belief that the registries conflict with the state constitution.

The LGBT group Fair Wisconsin will continue to defend the case in court.