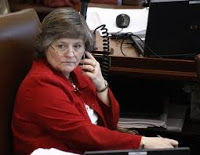 OKLAHOMA: Sally Kern Votes To Approve Her Own Reprimand For Racism After facing calls for her resignation by GLAAD and the NAACP, Oklahoma lawmaker Sally Kern has voted to approve her own reprimand by the state House for racist remarks made last week. Kern preceded her vote with another apology, this one delivered to the full chamber.

“Last Wednesday night while debating a bill, I said some words that were not well thought out and that offended many African Americans and many women,” said Kern, who fought back tears and quoted several Bible passages during her apology. “That was not my intent, but sadly it happened, and I take full responsibility for it and I’m truly sorry. While my words were not expressed well and implied things I did not mean, they were not spoken with any contempt or malice.”

The meaningless reprimand then passed 76-16.

Previous Tony Perkins: Gay Activists Are Intolerant Hateful Vile Pawns Of Satan
Next The Rise Of The Deathers