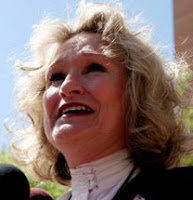 “I am going to miss my son every day of my life but this, the death of Osama bin Laden, seems to be perfect closure for the foul and evil deeds that that man has committed. Bill Clinton made a real effort to root out Osama bin Laden. George W. Bush promised the American public that we will not rest until we have Osama bin Laden in our control, and then Barack Obama was able to make good the promises and efforts of his two predecessors. I’m very grateful to all three men for their strength and their persistence in this project.” – Alice Hoagland, mother of openly gay rugby player and 9/11 hero Mark Bingham, speaking to the Bay Area Reporter.

RELATED: The documentary With You, The Mark Bingham Story previews at the Castro Theater on June 18th.