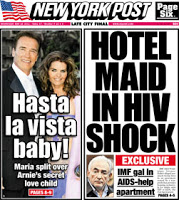 The reliably yellow journalists at the New York Post have outraged AIDS activists with a front-page claim that the hotel maid at the center of an rape scandal lives in subsidized public housing for HIV patients. The Post darkly warns that alleged rapist and International Monetary Fund head Dominque Strauss-Kahn now “has more to worry about” than a lengthy prison sentence. Housing Works weighs in angrily:

“Once again the New York Post proves that they are happy to trample on human dignity to sell newspapers. There is no public interest in knowing this woman’s HIV status—yet the woman herself could suffer greatly from the revelation,” said Housing Works President and CEO Charles King. “The Post’s story is an attack on women and all people with HIV.” The Post story intensifies the stigma surrounding AIDS by implying that HIV is an inherently horrifying disease.

The woman’s lawyer this morning denied the Post’s claim, saying she “absolutely” does not live in housing for people with HIV. But the story has already been picked up in France, where a new poll revealed that almost half of the nation believes the entire case was a set-up meant to derail the political ambitions of Strauss-Kahn, who was widely pegged to become the next president.