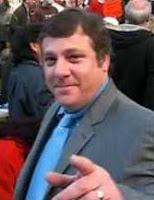 “Targeting anybody for importation into the country based on their sexuality doesn’t sound like something that Congress should be messing with at all. They’re looking to bring in anybody challenging the established culture inside the United States that they want to bring down. And though the majority culture of the United States for the last 200 years has been predominately European Christian, they are looking for anybody that would take issue with that. And, of course, Christianity preaches against sodomy.” – William Gheen, president of Americans for Legal Immigration, denouncing the Uniting American Families Act.