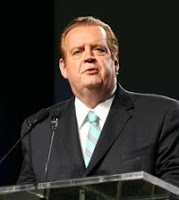 “So a six-foot guy who shaves every day can come in wearing a dress, high heels, and earrings and tell his employer that he’s really a woman and he wants to use the women’s bathroom facilities, and there’s nothing the employer can do to stop him if he wants to do business in Metro. Clearly the Metro Council members, a majority of them succumbed to the intense lobbying of a minority that wants special rights for gay, lesbian, bisexual and transgendered people.” – Richard Land, president of the Southern Baptist Convention’s “ethics commission,” responding to Nashville’s decision not to do business with companies that discriminate against their LGBT employees.

RELATED: In 2008 Land named the “homosexual agenda” as one of the Four Horsemen of the Apocalypse.