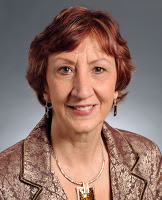 The Minnesota Senate Judiciary Committee today advanced a bill to place a constitutional ban on same-sex marriage on the November ballot. But not before Democrat Barb Goodwin (left) tried a slick move to sink the bill.

Goodwin suggested tweaking the text of the proposed amendment so the Minnesota Constitution would not only limit marriage to couplings of one man and one woman, but also to one marriage per person per lifetime—a ban on divorce, though not separation. The proposed ballot question: “Shall the Minnesota Constitution be amended to provide that only a union of one man and one woman shall be valid or recognized as a marriage in Minnesota?” Goodwin first proposed adding the words “for life” after the word “union,” then to replace “a marriage” with “one marriage.”

The amendments failed. Goodwin reacted (to roars of approval from the gallery): “I will never in this Legislature, will never vote — even if it means I’m voted out — to put language of discrimination in the constitution. I could not live with myself, and those of you who claim to be good Christians, you need to think about what you are doing here.”