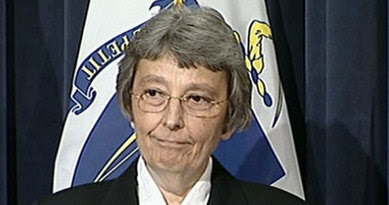 Openly gay Massachusetts Supreme Court nominee Barbara Lenk endured some Christianist assholery yesterday during her marathon seven hour confirmation hearing. Lenk is married to a woman and therefore placing her on the state’s highest court will turn children gay. Or something.

During her confirmation hearing before the Governor’s Council, some critics testified that her marriage is part of a broader plan to give legitimacy to homosexuality in the public arena. “This will be a clarion call to all that want to indoctrinate our children into homosexuality,’’ testified Sally Naumann, who, like Lenk, lives in Carlisle. “How will we ever be able to say no to our children?” [snip] With her wife, lawyer Debra Krupp, and their two teenage daughters sitting behind her, Lenk was stone-faced during the criticism. Lenk vowed to be a judge who hews to the law and will not be what critics call an activist judge. She also balked when asked to list the cases she handled that dealt with gays or lesbians. “I don’t keep records that way,’’ she said. “I don’t regard these cases in any way of being homosexual or lesbian issues.’’