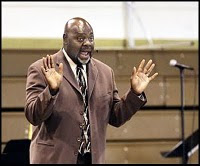 In a partnership with World Net Daily, Pastor Ken Hutcherson is spearheading a letter campaign to Congress demanding that legislators “leave the 5000 year-old definition of marriage alone.” For the low, low price of $29.95, enemies of equality can send the letter to every legislator.

Now there is a way to fight back. It’s an innovative, high-tech, grass-roots lobbying campaign called “TIME TO DEFEND MARRIAGE: The Genesis 2:24 Campaign.” Supported by the Family Research Council, Dr. James Dobson, Gary Bauer and dozens of high-profile Christian leaders throughout the country, headed by Ken Hutcherson, pastor of the Antioch Bible Church in Washington state. It’s a project of a new coalition called “The Initiative for Moral Excellence” – or TIME. The campaign allows you to lobby all 535 members of Congress to fight legal challenges to the Defense of Marriage Act, a piece of legislation defining marriage as an institution between one man and one woman and signed by President Clinton into law. Nothing short of a complete repudiation of those legal attacks on the law will save marriage in America. By participating in this campaign, you can send copies of the letter below to all 535 members of Congress for one low price of $29.95 – far less than postage alone would cost you if you tried to do it yourself.

WND is selling the letter in their “superstore,” where you can also buy “survival seeds” to live through the coming apocalypse.