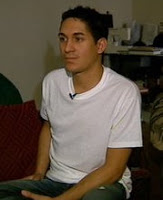 Petty Officer Derek Morado today won his discharge hearing with the Navy after being told he faced ejection due to a MySpace photograph that was turned in anonymously. In the photo, Morado is seen kissing another man. Morado’s lawyer told KMPH News that even though DADT has been repealed, that doesn’t mean the military’s investigations are over.

“There’s nothing illegal about what the Navy is trying to do to this man right now as I understand it,” Attorney Mark King said. King says that’s because the law, is the law. “If someone does something in January that by June is no longer a crime, there’s nothing unconstitutional about prosecuting them in September over what happened in January, because in January it was against the law,” King said. A Navy spokesperson tells KMPH News, the repeal of the “Don’t Ask, Don’t Tell” policy has to be certified by the Secretary of Defense, Chairman and President. After that, it will take another 60 days before it goes into effect. “We have to treat them all with dignity and respect. At the same time there is a law and we have to maintain that law,” Navy Commander Danny Hernandez said. But for Derek Morado, it wouldn’t matter. On Thursday the board voted against discharging him, which means he can continue his dreams of a decorated military career.

According to a press release from GetEQUAL, the Navy’s panel voted 3-0 in favor of Morado’s retention.