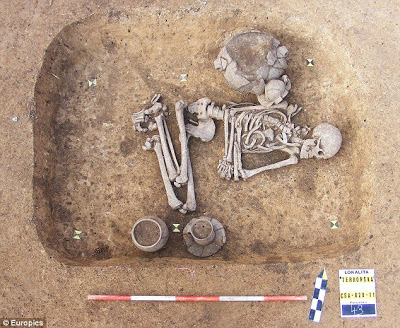 The discovery of a 5000 year-old skeleton in the Czech Republic has scientists speculating.

During that period, men were traditionally buried lying on their right side with the head pointing towards the west; women on their left side with the head facing east. In this case, the man was on his left side with his head facing west. Another clue is that men tended to be interred with weapons, hammers and flint knives as well as several portions of food and drink to accompany them to the other side. Women would be buried with necklaces made from teeth, pets, and copper earrings, as well as domestic jugs and an egg-shaped pot placed near the feet. The ‘gay caveman’ was buried with household jugs, and no weapons.

Archaeologists do not think it was a mistake or coincidence given the importance attached to funerals during the period, known as the Corded Ware era because of the pottery it produced. From history and ethnology, we know that people from this period took funeral rites very seriously so it is highly unlikely that this positioning was a mistake,’ said lead researcher Kamila Remisova Vesinova. ‘Far more likely is that he was a man with a different sexual orientation, homosexual or transvestite. What we see here does not add up to traditional Corded Ware cultural norms.’ An oval, egg-shaped container usually associated with female burials was also found at the feet of the skeleton.

Previous Gadhafi To Obama: Please Call Off Attacks
Next Savage Vs. Gallagher, Round 2