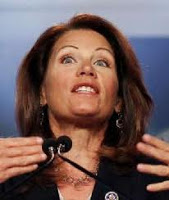 “I think that the agenda that we have seen – we know that sixty-three percent of all households have seen a major decline in their personal wealth, a decline in their personal income, and an increase in their debt level. That’s all attributable directly to Barack Obama’s principles. I don’t think it’s by accident we’re seeing people struggling and we’re seeing redistribution of wealth. I think Barack Obama is getting exactly the outcome that he hoped for.

“All of us, I think are perhaps giving the President too much credit thinking, well, he probably just doesn’t understand that liberalism actually makes people poorer. I actually think that this is what the President wants. I believe that he wants to see redistribution of wealth because if you ever notice, the President seems to be angry and irritable and sarcastic about people who have succeeded in the United States and job creators. Those seem to be the two sectors that he most wants to punish.” – Rep. Michele Bachmann, speaking on the radio show of Pat Robertson’s lawyer, Jay Sekulow.