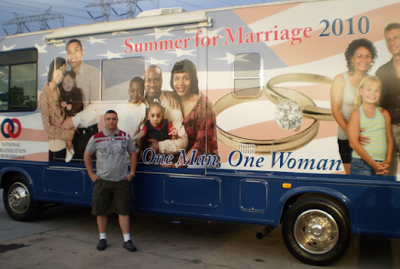 Jeremy Hooper has a big scoop over at Good As You today, where he exclusively reports that a top organizer at NOM has announced that he now supports marriage equality. Louis Marinelli, known to some of us the virulently nasty moderator of NOM’s Facebook page and the organizer of last year’s laughably unattended national bus tour, tells Hooper all about his dramatic change of heart. An excerpt:

As a supporter of civil marriage equality, any statements I’ve made in the past about not recognizing homosexual relationships for one reason or another, of course it goes without saying that I no longer stand by these comments and I apologize for the insensitivity. Same-sex couples, whether they are married, in civil unions or domestic partnerships, ought to be recognized for what they are. I consider myself agnostic and while homosexual acts may very well be “immoral” in the eyes of Christian morality, I can no longer stand by any comments I’ve made in the past about the immorality of homosexuality.

There are a variety of different sets and sources of morals and no one has the right to impose their set on the rest of society. Once I wrote that homosexuals are deceitful people who care only about themselves or something to that effect. Honestly, aren’t we all? It was wrong for me to exclude everyone else from that description. We all lie and when it comes down to it, we will do what is best for ourselves. So throwing in a little levity, I stand by the comment but want to apologize for limiting its scope to the gay community.

Go and read the complete interview at Good As You, where Marinelli also denounces Paul Cameron and Peter LaBarbara. And now we wait to see if Maggie Gallagher and Brian Brown will have anything to say about this…….

“This defection is a good example of what is, and will continue to be consistent in the fight for equality,” said Kevin Nix, NOM Project Director for the Human Rights Campaign. “Once people actually meet LGBT people, they are more likely to support equality.” Marinelli did harm to the LGBT community. He was the strategist behind NOM’s multi-state 2010 Summer Bus Tour and a key digital strategist for the organization, writing things like, “Those who wish to promote homosexual behavior are encouraging people to shorten their life spans.” “Even NOM’s own people are having trouble with the organization’s unusual mission: to stop committed gay and lesbian couples from getting married,” Nix added. “We know such defections among more Americans, including NOM’s most strident supporters will continue over time.”