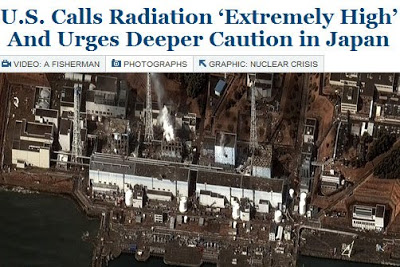 The chairman of the United States Nuclear Regulatory Commission gave a significantly bleaker appraisal of the threat posed by Japan’s nuclear crisis than the Japanese government, saying on Wednesday that the damage at one crippled reactor was much more serious than Japanese officials had acknowledged and advising to Americans to evacuate a wider area around the plant than the perimeter established by Japan. The announcement marked a new and ominous chapter in the five-day long effort by Japanese engineers to bring four side-by-side reactors under control after their cooling systems were knocked out by an earthquake and tsunami last Friday. But it also created a split between Washington and Tokyo, after American officials concluded that the Japanese warnings were insufficient, and that, deliberately or not, they had understated the potential threat of what is taking place inside the nuclear facility.