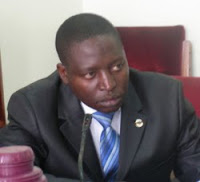 Box Turtle Bulletin alerts us that despite recent media reports that Uganda’s “kill gays” bill had been shelved, in fact it will be debated in the national parliament next week. The bill came into being after American evangelicals visited Uganda with claims that foreign homosexuals wanted to pay Uganda’s children to become gay.

The controversial Anti Homosexuality bill is one of several bills that Members of Parliament on the Legal and Parliamentary Affairs committee are set to debate when the House resumes business next week. Speaking to the media at Parliament today, the committee chairman, Stephen Tashobya said though the bill has created both local and international concern, it is up to Parliament to pass the bill. Tashobya says the committee will hold public hearings where stakeholders’ views will be heard and a report made to the House for debate and possible passing before Parliament closes the 8th Parliament.

RELATED: Earlier this week the U.S. House Financial Services Committee approved a bill that would discourage the granting of American foreign aid to nations that “physically persecute” their LGBT citizens. The bill, sponsored by Rep. Barney Frank, faces an uncertain future with the full House.