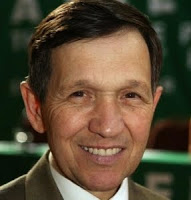 Rep. Dennis Kucinich (D-OH), who ran for the Democratic presidential nomination in 2008, says Obama’s decision to attack Libya without approval from Congress is an impeachable offense.

“President Obama moved forward without Congress approving. He didn’t have Congressional authorization, he has gone against the Constitution, and that’s got to be said,” Kucinich said in an interview with Raw Story. “It’s not even disputable, this isn’t even a close question. Such an action — that involves putting America’s service men and women into harm’s way, whether they’re in the Air Force or the Navy — is a grave decision that cannot be made by the president alone.” According to Kucinich, Obama’s decision “would appear on its face to be an impeachable offense,” though he questioned whether Congress would ever move forward with a trial in practice.

According to the Vietnam-era War Powers Act, presidents must seek approval from Congress withing 48 hours of committing U.S. troops to action. The above-linked story notes that the act has been “mostly ignored” by presidents including Bill Clinton, Bush I, and Ronald Reagan.

Previous If Your Son Is Gay, Get Drunk
Next Trevor Project To Honor Daniel Radcliffe