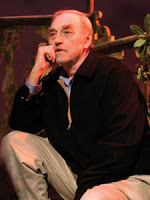 Pulitzer Prize-winning openly gay playwright Lanford Wilson died of pneumonia yesterday at the age of 73. Wilson is considered to have been one of the primary figures in the creation of New York’s vibrant Off Broadway theater movement.

Mr. Wilson’s work was first seen in such bohemian, downtown dens as Caffe Cino and Cafe LaMaMa E.T.C. His youthful colleagues included writers Sam Shepard, Leonard Melfi and Jean Claude van Itallie. In 1969, he became a founding member of the Circle Repertory Company, which became an influential Off-Broadway hothouse of talent during the 1970s. There, many of his most significant works debuted, including The Hot l Baltimore and Talley’s Folly. Mr. Wilson won the Pulitzer Prize for the latter, the central and most famous play in his Talley Trilogy, which tracked the adventures of several generations of the same Missouri clan.

Wilson’s Burn This is one of the best plays I’ve ever seen. And the short-lived 1975 TV version of Hot l Baltimore, which featured one of television’s first gay couples, was fantastic despite its reputation as Norman Lear’s only sitcom “failure.”