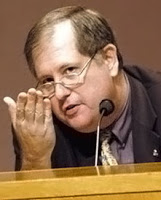 “The purpose is not just to prevent Massachusetts people coming down. It’s also to put a big letter of shame on the behavior. We don’t want them here. We don’t want them marrying. If you’re going to do it in San Francisco, it’s your own business. Bet it will pass with over 60 percent. The public in my opinion knows the difference between perversity and diversity.” – Mecklinburg County Commissioner Bill James, predicting easy passage of North Carolina’s pending constitutional amendment banning same-sex marriage.

James has a long track record of outrageously homophobic statements, including his regularly-spouted claim that gays are “sexual predators” who are “7 to 11 times more likely to molest children.” In December 2009 he mocked the AIDS-related death of a fellow legislator’s child, saying to her, “You son was a HOMO? Really?” You can contact him here.

Same-sex marriage has long been banned in North Carolina by state statute, but a constitutional amendment has been swatted down for almost a decade by a Democrat majority legislature. Last year the GOP swept into power in both state chambers.