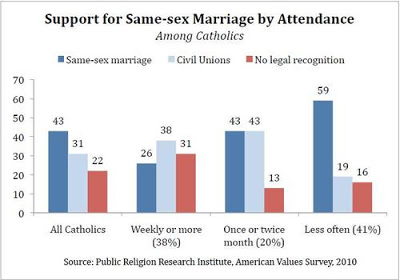 Today NOM screams that the above “LGBT-funded poll falsely claims that most Catholics support same-sex marriage” and links to a story on CatholicVote.org.

First, this much-circulated poll was paid for by Arcus – who we know about – and the Evelyn and Walter Haas Jr. fund, which separately paid PRRI to “help develop religious education strategies supporting gay equality” in 2009. In the same year, the same Haas Jr. fund paid PRRI to survey Presbyterians on LGBT issues. In other words, PRRI provides polling to help gay-rights groups figure out how to better push their agenda among various faith communities. And yet, despite these multiple cash infusions from LGBT-groups like Arcus and its ilk, and despite the clear bent of this polling towards growing support for the LGBT agenda among faith groups, PRRI is still described as a “non-profit, nonpartisan, independent organization.” Really?