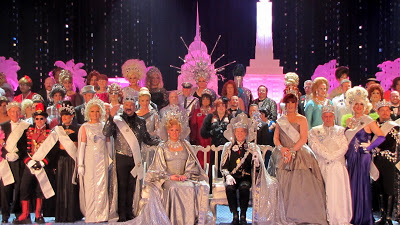 Last night I attended the Imperial Court of New York’s 25th annual Night Of 1000 Gowns, which this year benefited the Ali Forney Center and the Trevor Project. Swirling amidst all of the winking pomp and circumstance were empresses, emperors, duchesses, dukes, viscountesses, dowager empresses, and probably a dozen other royalty titles unknown to me. Also in the room were 100% of all the rhinestones and tiaras to be found in North America.

Among the bold-face names in attendance were the evening’s honoree, longtime activist David Mixner, the cast of Logo’s A-List, the cast of RuPaul’s Drag Race, director Chi Chi LaRue, “JMG addict” Wilson Cruz, and actress Ally Sheedy, who cracked up when I asked her to say “No disassemble!” Miss New York 2010 Claire Buffie spoke eloquently about her LGBT rights platform during the Miss America pageant, gay pop star Ari Gold arrived with two slave boys on leashes, Dan Choi walked in on the arm of a statuesque attendee he “met on the escalator,” and My Princess Boy author Cheryl Kilodavis worked the room with a handsome man in one hand and a stack of her books in the other.

This was my first Imperial Court event and I found the entire evening simultaneously spectacular and spectacularly silly. But one got the distinct impression that everybody there was totally in on the joke and folks, this group has raised buckets and buckets of money for LGBT causes over the decades. Check out the slideshow at the bottom of this post for many, many photos of the glamor, plus lots of celebs not mentioned above. Full-screen versions of the photos can be found here. You’ll also enjoy Matthew Rettenmund’s coverage at Boy Culture, where you’ll find many red carpet video interviews. Previous Newt Gingrich: Cheating On My Wives Taught Me How To Impeach Bill Clinton
Next Howard Stern Rips Victoria Jackson