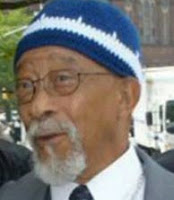 Ronald Jones, 55, beat and strangled his friend Robert Jenkins to death on Saturday as the pair drank in Jenkins’ Staten Island home. Yesterday Jones (left) told investigators that he killed Jenkins in a “rage” after an unwanted sexual advance.

Some of the victim’s enraged relatives were so overcome by emotion after spotting the suspect in court, they had to be held back. “That was my father!” Thomas Jenkins, 38, said angrily. The suspect didn’t respond. And he didn’t make eye contact with the victim’s 30 or so relatives gathered in court. When the judge denied Jones bail, mourners broke out in applause. Robert Jenkins, 68, a retired mechanic and grandfather of 11, was found dead early Saturday in his West Brighton home. He had been drinking cognac with Jones for hours. Jones was visiting from Maryland.

Staten Island Live reports that victim’s son arrived at the home to find the killer passed out with his arm around his father’s corpse. Jones has pleaded not guilty to the charge of second-degree murder, despite having confessed.