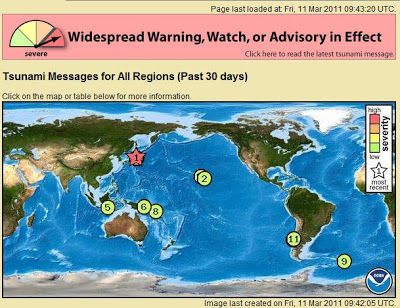 At a reported 8.9 magnitude, it appears to have been the worst quake in Japanese history. The live video of the resultant tsunami has been both riveting and horrifying.

The quake was originally reported at a magnitude of 7.9 but was later upgraded to 8.9. That makes it the fifth largest recorded world-wide since 1900, according to the U.S. Geological Service, larger than the 7.9-magnitude Great Kanto Earthquake that devastated Tokyo in 1923 or the 6.8 magnitude quake that hit Kobe in 1995. The quake caused mass panic around Tokyo, where workers evacuated their buildings and power was cut off at 4.1 million households in Tokyo and neighboring prefectures.

Hawaii Civil Defense has ordered the immediate evacuation of all coastal areas. Go to NOAA for the latest on tsunami warnings, which have been extended to much of the U.S. west coast. Previous Sen. Rand Paul: I Have Less Choice In Toilets Than Women Have In Abortion
Next Tony Perkins: Obama Is Ignoring The Bullying Of Christian Students