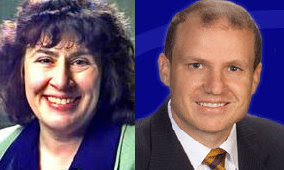 Even though in 2003 the U.S. Supreme Court struck down all anti-sodomy laws in its landmark Lawrence vs. Texas ruling, two state legislators in Kansas are fighting to keep their now unconstitutional laws on the books. The Kansas Equality Coalition reports:

State Representatives Jan Pauls (D, Hutchinson), and Lance Kinzer (R, Olathe) said yesterday that being gay or lesbian should remain a crime in Kansas. Pauls made, with Kinzer’s support, the successful motion in the Kansas Legislature’s Corrections and Juvenile Justice Committee to keep the criminalization of gay and lesbian relationships on the books. Their action removed key language from HB2321, proposed by the Kansas Judicial Council, which would have resolved inconsistencies in Kansas criminal code, as well as remove unconstitutional laws. “Jan Pauls was trusted to be a judge before becoming a state representative, and should know better than to support unconstitutional laws, breaking her oath to defend the Constitution,” said Jon Powell, Chair of the Hutchinson Area chapter of the Kansas Equality Coalition. “We are fed up with her obvious support of harassment of gays and lesbians. We will not be bullied.”

Equality-minded Kansans are encourage to join a March 17th demonstration calling for Rep. Paul’s removal as chairwoman of the Kansas House Judiciary Committee.