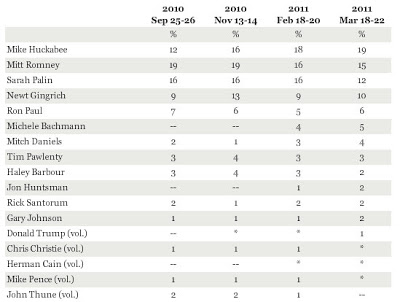 Mike Huckabee tops a large list of potential GOP presidential candidates in current support for the party’s 2012 nomination, with 19% of Republicans saying they are most likely to back him. This gives Huckabee a slight edge over Mitt Romney (15%). Sarah Palin is now at 12% after receiving 16% support in three prior Gallup polls. Newt Gingrich is the only other potential candidate who registers double-digit support. Sixteen percent of Republicans currently have no preference.