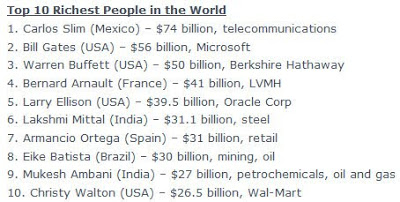 Forbes Magazine has issued this year’s list of the world’s richest people. The number of billionaires grew by 199 in 2010.

Mexico’s Carlos Slim expanded his lead as the world’s richest man, adding $20.5 billion to his net worth in the past year, for a total fortune of $74 billion. Microsoft founder Bill Gates, now co-chairman of the Bill & Melinda Gates Foundation, is second with a total worth of $56 billion. Despite Apple’s leaps in value the past year, CEO Steve Jobs is still only No. 110 on the list, worth a comparatively more modest $8.3 billion. By February, Apple had grown to be worth $100 billion more than Microsoft. Eight of the world’s billionaires this year are 30 years old or younger, and half of them got rich off of popular social networking site Facebook.

Tea Party kingpins David and Charles Koch are tied at #18, with a combined net worth of $44B. GOProud backer Peter Thiel lands this year at #833.