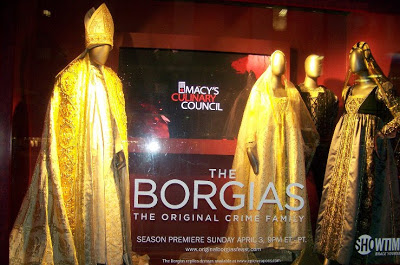 The Catholic League is pissed at Macy’s for the above display window promoting Showtime’s upcoming series, The Borgias, which was “written by an atheist who hates the Catholic Church.” Bill Donohue: “Why Macy’s would want to pick a fight with Catholics during the Lenten season is not known, but that it has is certain.” Wikipedia’s entry on the Borgia family, one of whom became Pope, notes: “They have been accused of many different crimes, including adultery, simony, theft, rape, bribery, incest, and murder.” Which is the real reason Donohue hates seeing the series promoted.

Previous Pat Condell: The Great Jesus Swindle
Next Woman In Pants Are An Abomination