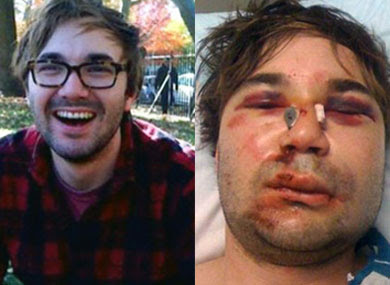 An openly gay Brooklyn man required ten hours of surgery and three metal plates in his face after a February 22nd anti-gay attack by a group of six teenagers. Via yesterday’s Brooklyn Paper:

Barie Shortell, 29, was on N. Fourth Street on Feb. 22 at around 10:10 pm when he brushed past six teenagers wearing hooded sweatshirts. “Oh s–t, is that a guy or a girl?” one of the teens yelled. Shortell thought to himself that the slur was “juvenile,” but he crossed to Wythe Avenue just to be safe. But the group followed and shoved Shortell against a wall, fracturing his jaw, nose and eye sockets. He has no recollection of the attack. “I feel pretty confident they perceived me as a gay man and attacked me, but I can’t understand why they did what they did,” said Shortell. “I looked horrible. Blood was everywhere.”

At the insistence of the NYC Anti-Violence Project, the police have classified the attack as a hate crime, although no suspects have been apprehended. Today the AVP issued a press release denouncing the recent spate of hate crimes in NYC, which have taken lives in Staten Island and Queens this month.

The AVP points out a coming fundraiser for the above victim, who has no medical insurance. “The Barie Response is organizing a benefit for Barie to assist him in paying his medical bills. The benefit will be at on Wednesday March 23, from 7PM to 10PM at Blackout Bar, 916 Manhattan Avenue in Greenpoint, Brooklyn. While AVP is not sponsoring the benefit, we will be present to provide safety and outreach information.” You can donate directly via the above link.