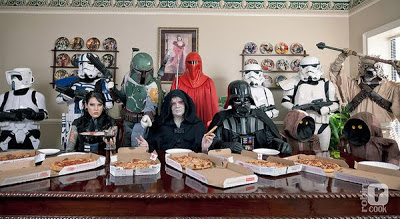 Remember a few years ago when the religious right completely lost their shit because of a similar Folsom Street Fair poster? Matt Barber was still a Concerned Woman in those days, but was UNconcerned with the hundreds of other Last Supper parodies out there. Because Folsom’s had filthy homos in it! Barber’s campaign against Folsom’s poster eventually caused their beer sponsor to pull their logo from the event. (Not their money, though.) But even though Emperor Palpatine himself stands in for Jeebus here, we’re betting this escapes complaint.