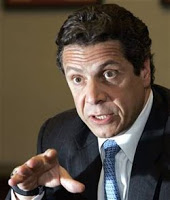 NY Gov. Andrew Cuomo announced yesterday that he will ask the state legislature to take up the issue of same-sex marriage before its current session ends this June.

His pledge was greeted warmly by gay-rights activists, who have waited with some uncertainty to see whether Mr. Cuomo, faced with a daunting battle over the budget, would make a charged social issue like legalizing same-sex marriage a priority. Legislation to do that has repeatedly passed the State Assembly, which is dominated by Democrats. But in December 2009, it failed in the State Senate, which was then also controlled by Democrats, by a vote of 38 to 24, an unexpectedly wide margin. It is not immediately obvious how the legislation would fare markedly better this year, given that the composition of the Senate, which is now controlled by Republicans, has not changed significantly since the last vote.

GOP state Senate Majority Leader Dean Skelos says that he won’t obstruct a vote on same-sex marriage, although his spokesman says the GOP has “more pressing issues” to consider.

Previous Area Where There Is Nothing
Next KANSAS: “Little Apple” Gets LGBT Rights