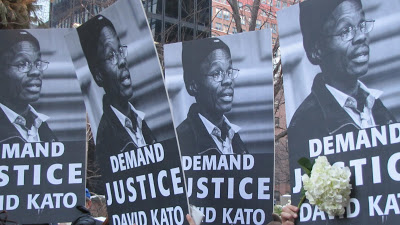 Despite the bone-chilling temperatures, a large crowd of LGBT activists, allies, and local politicians stood in the slush and snow tonight near the United Nations to memorialize slain Ugandan activist David Kato, who now stands accused being responsible for his own murder by the Ugandan police.

Speakers included the head of the International Gay & Lesbian Human Rights Commission, gay Ugandan nationals, gay clergy, and two NYC council members, all of whom vowed to get the truth about Kato’s murder from the Ugandan government, which receives $500 million in U.S. aid annually. Money being paid, it was pointed out, to enable the brutalization and murders of LGBT people.

Not forgotten at the event was the murderous complicity of American and Ugandan evangelicals in this brutal crime and speakers repeatedly spat out the names of Scott Lively, Rick Warren, and Martin Ssempa, all of whom were promised that their names and reputations will forever be linked to this outrage.

After the vigil, candles were lit and the crowd proceeded silently two blocks away to the Uganda Mission, where a Ugandan lesbian activist laid a letter of demands and flowers against a placard depicting Kato which had been propped outside the building’s entrance. As that occurred, the hundred or so people behind the barricades shouted up at the windows of Uganda House, “Stop the violence, stop the hate! Do your job, investigate!”