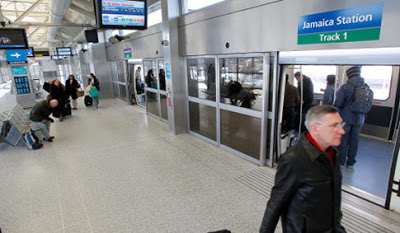 New York City’s MTA is considering installing a system of sliding subway platform doors as the number of deaths and injuries from suicide attempts and falls continues to rise. Ninety people were struck by subway trains in 2009, resulting in 40 deaths. The proposed barrier/door system would be similar to that used by the JFK Airtrain, seen above.

NYC Transit has drafted a two-page list of requirements for the platform-edge barriers in what is called a “Request for Information” that is due back from manufacturers in March. It asks companies interested in the project to describe their qualifications and how they might proceed if selected. Proponents say the door would do more than just help protect passengers – it would also help reduce the number of lawsuits and the million-dollar payouts the agency faces each year. Another added benefit: The doors would prevent trash from being tossed or blown onto the tracks. Hundreds of trains are delayed each month by small fires ignited by sparks from trains and the electrified third rail.

Costs would surely run into the several billions at least, were the change made system-wide at MTA’s hundreds of stations. The beleaguered agency is already facing a stiff budget deficit.