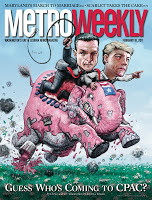 The Metro Weekly cover story on GOProud and the CPAC boycott has been posted online. Reporter Chris Geidner does a great job delving into the philosophy of GOProud and who their allies and enemies are. You should read the entire piece, but naturally I’ll excerpt a bit with a quote from me in it.

”The problem is that the gay left has decided what qualifies as pro-gay and what qualifies as anti-gay, and a whole bunch of the stuff that they think qualifies as pro-gay, I don’t think has anything to do with being pro-gay,” says Barron. “And, a whole bunch of stuff that they think is anti-gay, I don’t think is anti-gay at all.” Barron sees his mission as changing that. ”I think that, over time, obviously, people’s position on gay issues is evolving, and I think it helps to have a gay voice out there that says, ‘You don’t have to be with them on all the things they say you have to be with them on.”’

Saying that’s ”one of the things that drives the left crazy,” Barron becomes angered when describing the complaint that GOProud is ”providing cover to our enemies,” as gay left blogger Joe Jervis (Joe. My. God.) – a near-constant critic of GOProud – puts it. Barron isn’t having it. ”No, we’re not giving cover to bigots,” he argues. “What we’re doing is separating the people who don’t agree with the left-wing agenda from the real bigots. You can be against ENDA and hate crimes and federal safe schools legislation and not be a bigot. If you’re Tony Perkins, you’re a bigot. You’re against all of that stuff not because of any federalist reasons, but actually because you’re just a nasty, anti-gay bigot.” Jervis defends his tactics against GOProud, saying, ”What they’re actively advocating is blockage of some pretty critical LGBT rights that the movement has only begun to scratch the surface of.”